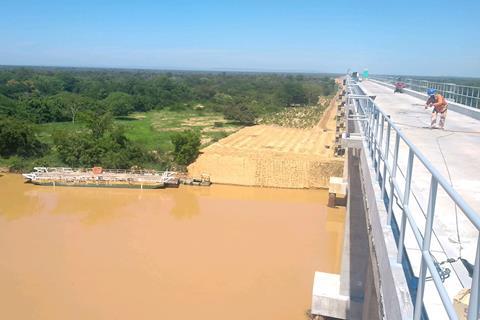 BRAZIL: Transport Minister Tarcísio de Freitas is seeking R$480m from the national budget in order to restart construction of the East-West Integration Railway. The funds would be provided as part of the Pró-Brasil national economic stimulus package announced on April 24.

The 1 527 km Ferrovia de Integração Oeste-Leste project will link Figueirópolis in Tocantins state with the Porto Sul deep-water harbour near Ilhéus in Bahia state on the Atlantic coast, providing an export corridor for minerals and agricultural produce from Tocantins, Goiás and Bahia states. The FIOL project was entrusted to state-owned developer Valec, but work was suspended with progress underway on about two-thirds of the project.

The minister envisages that the stimulus funds would be used to restart work on the 485 km central section between Caetité and Barreiras which is expected to cost R$3bn; about 35% of this has been completed.

The task would be allocated to Infra SA, a new entity to be formed by the merger of Valec and Empresa de Planejamento e Logística SA, which is also state-owned. This part of the railway includes a bridge over the São Francisco River, the longest river entirely within Brazil, where the structure has been completed but is not yet in use.

The 537 km section between Ilhéus and Caetité is about 80% complete, but another R$1∙14bn is needed to finish the job. The government has indicated that tenders for this work as part of a 35-year concession are to be sought during the second quarter, with an auction planned for the third quarter.

An application to build the 505 km final section between Barreiras and Figueirópolis, where a connection would be made with the Norte-Sul Railway, was submitted to the Brazilian Institute of Environment & Renewable Natural Resources in 2015.

Tarcísio de Freitas is also keen to see work commence on the 1 142 km Ferrogrão railway which would link Sinop in Mato Grosso state with the inland port of Miritituba on the River Tapajós. This R7∙3bn scheme would be let as a concession, with a submission made to the Federal Court of Accounts expected this month; de Freitas said in April that the scheme would be auctioned towards the end of this year or in early 2021. The route passes through the Jamanxim national park, a conservation area, but this is already affected by the BR163 trunk road. The line is expected to carry more than 42 million tonnes of freight a year by 2050, mostly grain.

In the meantime plans to extend Rumo Logística’s concession to manage and operate the Paulista network by 30 years to 2058 have been further delayed. Signature of the concession documents had been planned for April 17, but the Federal Court of Accounts had requested further changes, leading to the land transportation agency ANTT seeking more time to review the details.