Forth bridge to be replaced 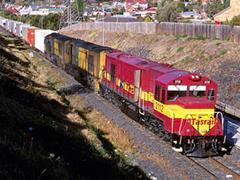 The deal announced on October 5 is the latest in a series of bridge replacement contracts with a total value of A$20m won by VEC, which is to build new bridges over the Blythe, Leven and Forth rivers and rehabilitate the River Don bridge at Devonport.

The first contract awarded covered the Blythe River Rail Bridge, scheduled for completion this month. 'Based on its performance and capacity to ensure consistent outcomes, VEC was subsequently and progressively awarded each of the remaining three rail bridge contracts', according to TasRail CEO Damien White. 'This is a good news story for Tasmania and the new Blythe River Bridge is not only symbolic of the revitalisation that is occurring right across the rail network, it is also a showcase for local skills'.

MB&A Project Consulting is project manager. Funding is being provided by the federal government's Nation Building programme, with completion planned by June 30 2014.