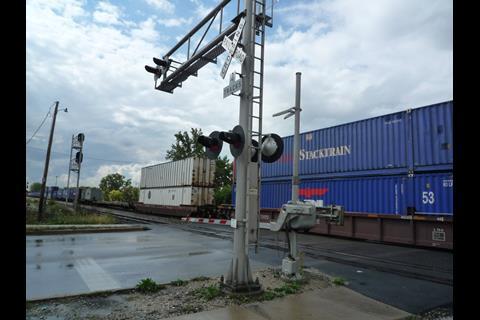 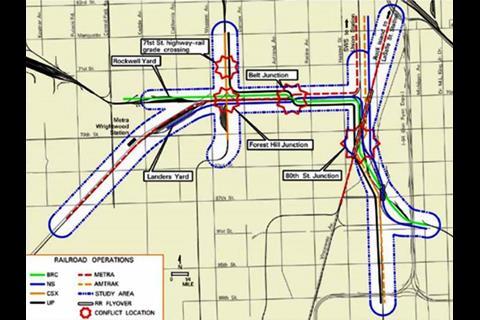 USA: The federal Department of Transportation has approved a $132m grant towards the 75th Street Corridor Improvement Project in Chicago, which forms part of the CREATE PPP programme to eliminate rail bottlenecks around the city.

The largest single package of works in the programme, the $1bn 75th Street project is intended to decongest rail operations in the Ashburn, Englewood, Auburn, Gresham, and West Chatham districts south of the city, where two passenger and four freight railways intersect at a series of flat junctions interspaced with road crossings. The interlocking at Belt Junction is currently used by 32 Metra and Amtrak passenger services and an average of 98 freight trains per day operated by CSX, Union Pacific, Norfolk Southern, Canadian Pacific and the Belt Railway of Chicago.

Grade separation of the key junctions will enable the operation of more trains while eliminating delays for road users. It is also expected to benefit other parts of the city where trains currently queue up to pass through the area.

The federal grant clears the way for final design and construction of the double-track Forest Hill Flyover, which will elevate CSX’s north-south line in the Western Avenue Corridor over the east-west tracks feeding BRC’s important Clearing Yard, and eliminate the adjacent 71st Street level crossing.

Remodelling of the junctions at 80th Street will reduce conflicts between NS, UP and BRC freight trains on the approach to the area, while the remodelling of the Argo Connections west of Clearing Yard will increase capacity for more through trains to use the east-west corridor.

In future stages of the project, the flat crossing between Metra’s South West Service and the BRC tracks at Belt Junction is to be eliminated, and a new flyover built to carry commuter trains over the freight tracks to connect with Metra’s Rock Island District. This would see the service from Joliet diverted into the city’s La Salle Street terminus, freeing up capacity at Union Station for more long-distance trains.

The federal funding comes from the $1·5bn Infrastructure for Rebuilding America discretionary grant programme, for which the USDoT invited bids in June 2017. It will be matched by $111m from Illinois DOT, $116m from the Association of American Railroads, $78m from Cook County, $23m from Metra, $9m from the City of Chicago and $5m from Amtrak, giving a total of $474m which is sufficient to fund the first half of the project.

‘Transportation is not just Chicago's historic strength; it is our competitive advantage for the future’, said Mayor Rahm Emanuel. ‘Federal investments in Chicago's rail system, roadways, waterways and airports create jobs for Chicago residents, strengthen our economy and benefit the entire country.’