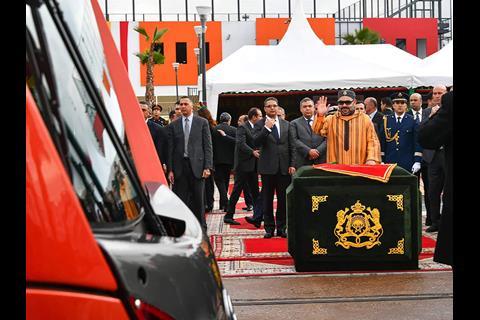 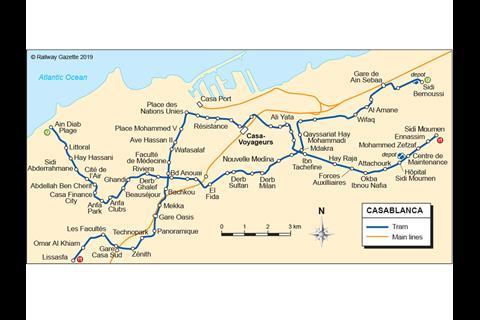 Line T2 runs between Sidi Bernoussi and Aïn Diab. It has a total length of 22·5 km, including 15 km of new alignment and 7·5 km of existing line between Anoual and Aïn Diab which was previously operated as a branch of T1. There are 33 stops, including interchanges with T1 at Abdelmoumen-Anoual and Ibn Tachfine-Mdarka.

Construction began in January 2016 and cost €3·8bn dirhams, including the planting of more than 2 500 trees and the depot at Sidi Bernoussi. Engie Group supplied signalling, communications, CCTV, fire detection and passenger information systems.

The network is operated and maintained by RATP Dev Services under a contract running for 12 years from December 2017. T2 services run every 6 min in the peaks and 9 min off-peak, with an end-to-end journey time of just over an hour. The line’s initial fleet of 32 Alstom Citadis 302 trams operating in semi-permanently coupled pairs is to be gradually increased to a total of 50 trams in 25 pairs.

Two further lines are planned to open in 2022. T3 would run 14 km from the Salmia district to the Casa-Port zone, and T4 would run 12 km from Attacharouk to Mers Sultan.

Two bus rapid transit feeder routes are also proposed, with L1 to run 12 km from Salmia to Lissasfa and L2 10 km from Errahma to Boulevard Ghandi.