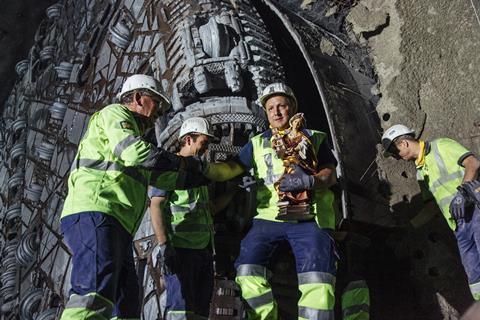 AUSTRIA: The north bore of the 32·8 km Koralm Tunnel was broken through on June 17, no fewer than 18 years after the start of work on the first exploratory tunnelling. Celebrations were limited because of coronavirus measures. The south bore had been completed on August 14 2018.

The tunnel forms the central part of the Koralmbahn, a new alignment being built to provide a 45 min journey time between Graz and Klagenfurt from 2025.

This forms part of a larger programme to modernise the Südbahn route, which also includes construction of the Semmering base tunnel.

The EU has provided €57m for the project from the Connecting Europe Facility for 2014-20. ‘Expansion of the railway network is an important prerequisite for achieving our ambitious green transport goals by 2050’, said Martin Selmayr, European Commission representative in Austria. ‘The Koralm Tunnel is a real breakthrough in transport policy not only for Austria, but for the whole of Europe. It is part of the 1 800 km Baltic - Adriatic corridor that connects Italy and Slovenia with Poland.’