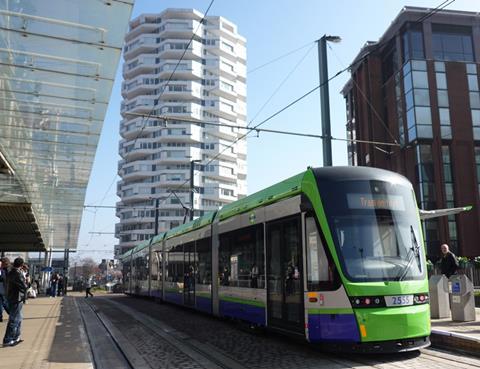 UK: Transport for London is to finance around one-third of the cost of double-tracking the Elmers End branch of the tram network, Mayor of London Sadiq Khan announced on May 21.

TfL is to provide £3·3m from its Growth Fund towards the estimated £9m estimated project cost. In addition to double-tracking the short branch, this would add a second tram platform to the Elmers End terminus. TfL says that this would enable service improvements and ‘address reliability issues’ on the network.

Other Growth Fund contributions announced on the same day include a new station building for Colindale on London Underground’s Northern Line and enhancement of Walthamstow Central Victoria Line station, including a second entrance and step-free access.

TfL is currently working with local councils and property developers to finalise the funding packages, and it hopes that work could begin later this year.

The Growth Fund aims to contribute to transport infrastructure projects that could help with development and regeneration opportunities.

‘Our Growth Fund is helping to unlock transport schemes which might not have been funded, helping to create more homes and jobs across London’, said TfL’s Director of City Planning Alex Williams. ‘By promoting “good growth” across London, we can help the capital continue to prosper while providing new transport options for Londoners.’