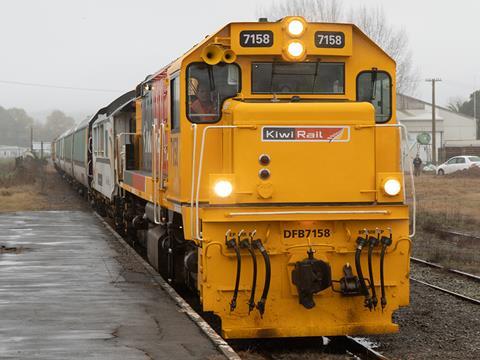 NEW ZEALAND: KiwiRail has completed rehabilitation of the 115 km Napier – Wairoa line, which was mothballed in December 2012 following severe storm damage. The project was supported with NZ$6·2m from the Provincial Growth Fund.

’Our next focus is to establish a log-hub in Wairoa so we are ready to begin running trains once harvesting gets back into full swing’, said CEO Greg Miller on June 14. ‘The amount of timber flowing from forests in the region is expected to quadruple in the next four years, and to get all those logs to market will require all transport networks working efficiently together.’

Meanwhile, the government has allocated NZ$400 000 to evaluate the potential for creation of a rail hub near Dannevirke. Subject to the outcome it would provide up to NZ$4m for KiwiRail to build it.

‘Dannevirke is only 37 km from Titoki Forest, which is already transporting more than 50 000 tonnes of logs a year to Napier Port by road’, said KiwiRail Deputy CEO Todd Moyle on June 10. ‘With harvests expected to hit 200 000 tonnes in the coming years it makes sense to get as much of that volume on rail as possible.’