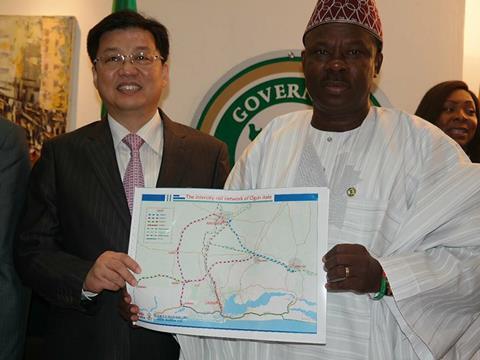 NIGERIA: A contract for the construction of a 334 km rail network in the southwestern state of Ogun was signed by the state government and China Railway Construction Corp’s China Civil Engineering Construction Co Nigeria subsidiary of on April 27.

The cost of the Nigeria Ogun State Intercity Rail Mass Transit Project is estimated at US$3·51bn. CCECC said ‘financing for the project has not been finally implemented’, and the final price is still to be determined through negotiations. The state government said a contractor-finance arrangement is envisaged.

The 334 km network would be developed in four phases, using designs produced by CCECC following the signing of a memorandum of understanding in 2013. The single track standard gauge lines would be built to Chinese specifications, with a design speed of 120 km/h.

The state government said that with the federal government and neighbouring Lagos state commencing work of their own networks, Ogun ‘needs to quickly key into it so as not to be deprived of the resultant benefits.’ It said ‘any economy where goods and services cannot be easily moved from one point to another is doomed and the rail system has proved to be the best means of mass movement.’