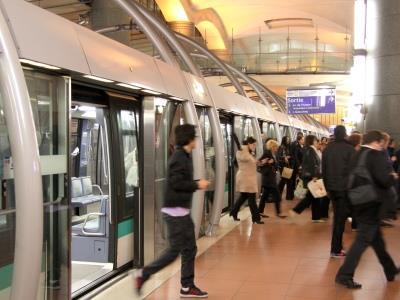 FRANCE: A consortium of ETF and Colas Rail has been awarded a contract for the design and installation of trackwork on the southern extension of Paris metro Line 14.

Being built in conjunction with the Grand Paris Express project, the 14 km extension from the current terminus at Olympiades will take the driverless metro line south to Orly Airport, adding seven stations. The end-to-end journey time for this section is expected to be 16 min.

Like the northern extension from Saint-Lazare to Mairie de Saint-Ouen and Saint-Denis Pleyel, the extension is being delivered for Societé du Grand Paris by STIF and RATP, which awarded the first civil works contracts in March 2018.

The first stage from Olympiades to Villejuif Institut Gustave-Roussy is due for completion in 2023 and the remaining section to Orly Airport the following year.

Under the €71·4m contract shared equally between the two partners, Colas Rail and ETF will be responsible for the detailed design and installation of the trackwork for the rubber-tyred line, including turnouts, pedestrian walkways, handrails and tunnel markings.

‘The southern extension of Line 14 is a major project which demonstrates Colas Rail’s know-how in the metro sector’ said the company’s General Manager, France, Jean François Milleron. ‘This follows on from the northern extension of the line carried out in previous years.’