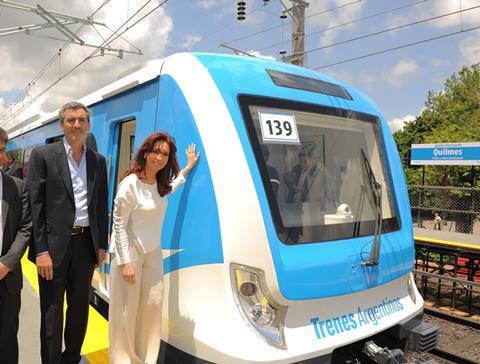 ARGENTINA: President Cristina Fernández joined Minister of the Interior & Transport Florencio Randazzo on December 5 to mark the start of electric operations between Buenos Aires and Quilmes, the latest phase to be completed under the programme to electrify the Roca commuter route to La Plata at 25 kV AC.

With 60% of passengers on the route now benefiting from electric services, Randazzo said that the programme would reach Berazategui on January 15, City Bell on February 15 and La Plata on March 15, according to the schedule agreed with contractor Supercemento.

As well as electrification and the introduction of a new EMU fleet supplied by CSR of China, the Roca programme has involved the construction of two parallel viaducts each 1 000 m long between Ringuelet and Tolosa at a cost of 380m pesos, intended to improve drainage. City Bell station has been rebuilt at a cost of 148m pesos, including one of the seven new road underbridges built on the route to replace level crossings.