Samsun – Sivas line to reopen this year after €280m upgrading 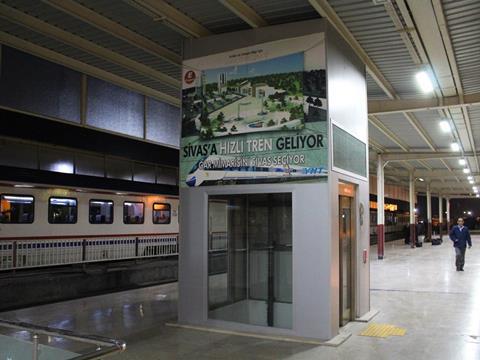 TURKEY: Infrastructure manager TCDD has begun testing running on the railway between Samsun and Sivas, which has been closed for upgrading work for the past three years. The line is expected to reopen to traffic by the end of the year.

Work began in September 2015 and has involved relaying and electrifying the 378 km route, as well as adding passing loops and stabling sidings totalling 42 route-km. Upgrading work has been undertaken at 41 stations and terminals along the line, while in some places the alignment has been rerouted to alleviate steep gradients and tight curves.

Signalling and train protection systems have also been installed along what was previously an unsignalled route.

The modernisation work will increase the line capacity from 21 trains per day to 54, and maximum speed has been raised to 120 km/h. This should enable the journey time between Sivas and Samsun to be reduced from 9 h 30 min to around 5 h, while also enhancing the route’s potential to carry freight.

The project is being partly funded with a grant of €240m from the European Union’s IPA Transport Operational Programme in Turkey, with the remaining €39m coming from the government.

Lead contractor for the civil works was a consortium of Celikler and Gulermak Heavy Industries, while AZD Praha delivered the railway systems and signalling under a package worth €27m.