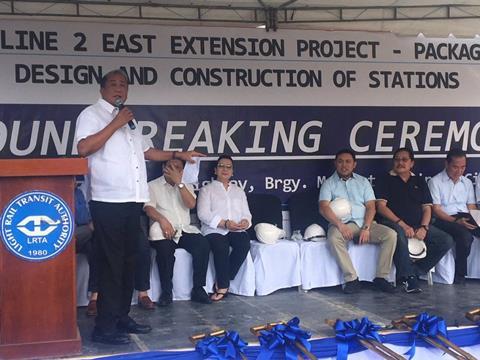 PHILIPPINES: A ceremony to mark the start of station construction on the Light Rail Transit Line 2 East Extension Project in Manila was held on May 30. Work on the two stations is due to begin on June 6, for completion in August 2018.

The 4 km extension would take Line 2 from the eastern terminus of Santolan to Masinag, with an intermediate station at Emerald. Work on the viaduct began in 2015 and has been completed. DM Consunji is building the stations under a 1·2bn peso contract.

The third works package, covering E&M systems, is due to be carried out between October 2017 and April 2019, with opening of the line expected shortly after.

Ridership on Line 2 is expected to increase by one-third from the current figure of 240 000 passengers per day once the extension is operational.