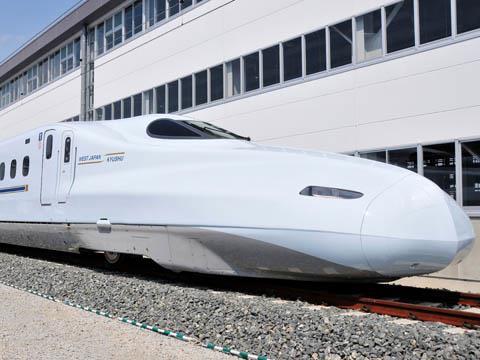 JAPAN: Three more extensions to the country's expanding high speed rail network have been authorised for construction by the government, under a programme which includes the first commercial application of gauge-changing trainsets which have been under development for the past decade.

The biggest of the three schemes announced by Transport Minister Yuichiro Hata on June 29 is the long-planned Hokkaido Shinkansen between Shin-Hakkodate and Sapporo. High speed trains are expected to reach the northern island in 2015, with completion of the link between the Tohoku Shinkansen at Shin-Aomori and Hakodate via mixed-gauge track in the Seikan Tunnel. The 211 km Hokkaido Shinkansen to Sapporo, serving intermediate stations at Shin-Yakumo, Oshamanbe, Kucchian, and Shin-Otaru, is expected to be completed by 2035, offering a journey time of around 5 h.

The 125·2 km extension of the Hokuriku Shinkansen along the coast of Honshu from Kanazwa to Tsuruga is to be completed by 2024, serving five stations at Komatsu, Kaga-Onsen, Awara-Onsen, Fukui and Nanetsu. The first section as far as Nagano opened in 1997, and the 228 km linking Nagano, Toyama, Isurugi and Kanazawa is scheduled to open by 2014. In the longer term, the Hokuriku Shinkansen is expected to be extended west from Tsuruga to connect with the Tokaido Shinkansen at Maibara or Kyoto, but a preferred route has not yet been announced.

The third project to be authorised is a further section of the Kyushu Shinkansen's western branch to Nagasaki, of which an isolated 45·7 km section between Takeo Onsen and Isahaya is already under construction. The government has now given the go-ahead for the 21 km western section between Isahaya and Nagasaki, which is to be completed by 2022. However, as the line will remain isolated from the rest of the network, through services between Hakata and Nagasaki are to be operated by gauge-changing trainsets using the existing line between Takeo-Onsen and a junction with the Kyushu Shinkansen at Shin-Tosu.

Estimated to cost ¥3 040bn, the three extensions are to be built by Japan Railway Construction, Transport & Technology Agency using public-sector funding from both national and regional governments. On completion, they will be leased to the JR Group companies to operate, attracting fees of around ¥1bn a year. Following the completion of the Shinkansen routes, the existing 1 067 mm gauge main lines are expected to be downgraded to local routes and transferred to third-sector operators supported by the regional governments.