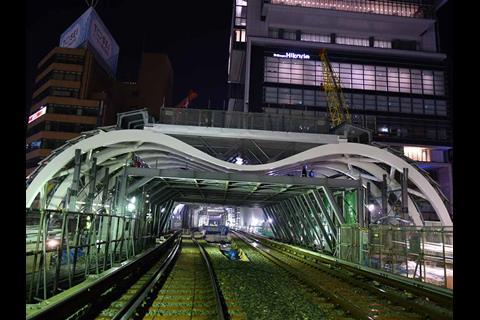 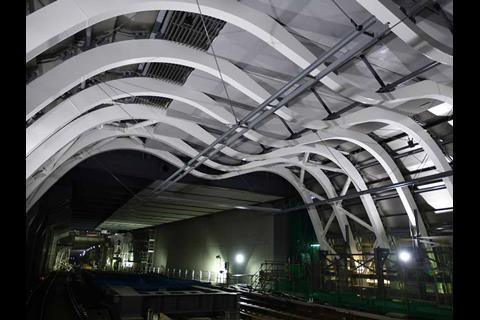 JAPAN: The final section of the overall roof for Tokyo Metro’s new Ginza Line station at Shibuya was winched into place on the night of February 6-7, marking a major milestone in the ¥29bn station reconstruction project to improve interchange with JR East’s Yamanote Loop suburban services.

Designed by architect Hiroshi Naito to provide a light and airy feel to the elevated station, the dramatic M-shaped roof is 110 m long, 28 m wide and 9 m high. It has been assembled from 44 separate spans weighing a total of 1 500 tonnes.

The Ginza Line is Tokyo’s oldest metro routes, opening from December 1938. At present it serves two narrow platforms on an elevated structure inside the JR station at Shibuya which are increasingly unable to cope with the 230 000 passengers/day interchanging between the new lines.

Tokyo Metro decided in 2009 to move the station 130 m to a new location above the adjacent Meiji-dori Avenue offering scope for wider platforms and a new ‘Sky-Deck’ walkway connecting the two stations. The fully-glazed overall roof is designed to provide natural light for the station and give users clear views of the adjacent shopping district, where large developments are envisaged over the next few years.

Construction of the new station is expected to be completed by August, with Tokyo Metro expecting it to open for passengers by the end of March 2020, ahead of the Olympic and Paralympic Games.