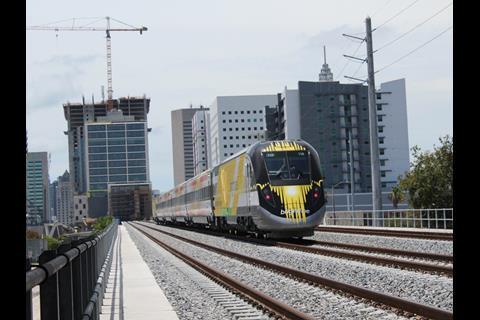 USA: Virgin Trains USA announced the award of contracts for construction of the 270 km West Palm Beach – Orlando International Airport Phase 2 of its inter-city corridor on May 21, saying they represented a total private investment of $4bn.

Construction of Phase 2 has been divided into four zones. Work on zones one and two is to begin immediately, with construction of zones three and four described as ‘imminent’.

Zone One covers a site near to Orlando International Airport, where Hubbard Construction Co and Wharton-Smith Inc will build the line’s rolling stock maintenance depot.

Zone Two covers a 6 km section of the route to the airport, which is to be built by contractor Middlesex Corp.

Zone Three covers the construction of a new 56 km rail alignment following the Highway 528 corridor between the airport and Cocoa, which Granite Construction Co will build to Class VII track standards for 200 km/h operation.

Zone Four covers the upgrading and doubling of 206 km of existing line from Class IV to Class VI standards to permit 176 km/h running. The work to be undertaken by the HSR Constructors joint venture of Herzog, Stacy & Witbeck and Railworks includes realigning 90 km of existing track, the construction of 160 track-km of new Class VI track within the existing right of way, rehabilitation of 45 km of passing loops, the installation of around 40 turnouts and crossovers and relocation of another 40, resignalling including the provision of Positive Train Control, upgrading 155 level crossings and replacing 19 bridges.

‘Connecting central and south Florida will bring thousands of jobs today and by modernising infrastructure, we will strengthen Florida’s economy for decades’, said Patrick Goddard, President of Virgin Trains USA. ‘For a project of this scope and magnitude, a world-class construction team has been assembled to undertake this tremendous assignment and we congratulate them helping us make history.’