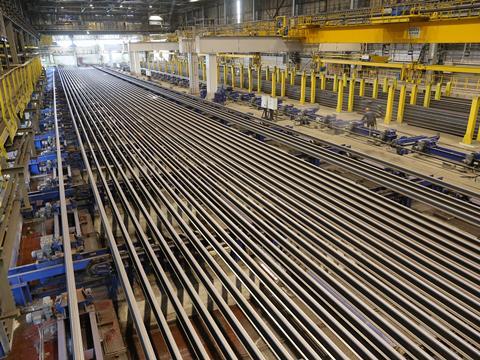 EVRAZ: Russian steel maker Evraz will use the InnoTrans exhibition to highlight its export business; the company says it plans to export more than 100 000 tonnes of rail from its Novokuznetsk works in Siberia this year.

The Novokuznetsk rolling mill was extensively refurbished in 2013, and since then Evraz has been expanding the factory’s range of products to cover a greater variety of rail lengths and rolling methods. In particular, the Novokuznetsk plant is now able to produce rails complying with European TSIs as well as Arema standards for North America, where Evraz also owns a number of steel mills.

Last year, Evraz signed its first export contracts with Brazil, and this year more than 20 000 tonnes of head-hardened rail is to be shipped to heavy-haul freight railways there. In addition, 13 500 tonnes of rail from Novokuznetsk will be laid in Delhi this year as part of work to extend the metro network.

While Evraz continues to seek more export business, the company reports that some significant opportunities remain in Russia despite an overall deterioration in macro-economic conditions. While RZD’s top priority under its recently-appointed President Oleg Belozerov is maintenance and renewal of existing lines, major enhancements to the Baikal-Amur and Trans-Siberian main lines are going ahead, and Evraz is already supplying rails for both projects.

The company is investing significant resources in developing specialised steels for Russian conditions that will be more durable and more able to cope with extreme contrasts in seasonal temperatures. One area of research is the development of very heavy duty rails for mixed traffic corridors carrying both heavy freight and passenger trains running at up to 250 km/h.

Head-hardened rails are becoming increasingly commonplace, and Novokuznetsk is now able to supply several types. Rails with higher wear resistance and reduced susceptibility to rolling contact fatigue can be supplied for sinuous or steeply-graded routes, where rail wear is a pressing concern. These have 30% to 40% higher wear resistance than standard designs; Evraz has also developed what it claims to be a unique highly-resistant head-hardened rail for operations in extreme cold down to -60°C.

Looking to the future, Evraz believes that development of the planned Moscow – Kazan high speed railway will require new parameters for rail technology. Therefore the company has already started to develop a novel design capable of withstanding axleloads of up to 22·6 tonnes, operating speeds of 400 km/h and a temperature range between -48°C and +67°C.

To achieve these goals, Evraz has committed to further developing its production capabilities at Novokuznetsk. Novel steel grades are being adopted which can reduce non-metallic content by up to 25%, and the hydrogen content of the molten steel has also been reduced. Bespoke rolling modes are to be introduced and the control system upgraded, while a high-performance pulse-echo ultrasonic testing rig has already been installed.

RZD and its partners are still working to finalise the technical specifications for the Moscow – Kazan project, which is expected to have significant Chinese involvement. Once a specification has been authorised, Evraz plans to test the new rails at the Shcherbinka research centre near Moscow and on the Oktyabrskaya Railway between Moscow and St Petersburg, where Sapsan trains already operate at up to 250 km/h.