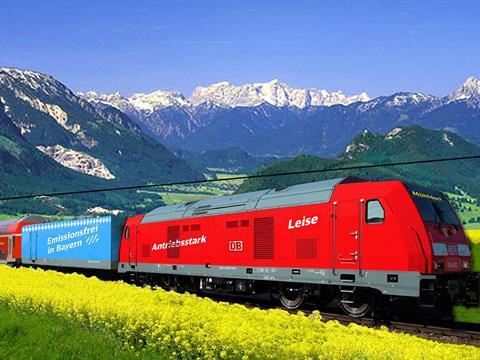 GERMANY: Proposals to significantly reduce the use of diesel traction in favour of low-emission alternatives have been presented to the Bayern cabinet by Land Transport Minister Joachim Herrmann.

The Bayerische Elektromobilitäts-Strategie Schiene (BESS) is intended to support the federal government’s 2050 climate targets, and to make rail a more attractive option for passenger and freight transport. ‘Electric-powered trains are more environmentally friendly, quieter, more efficient, require less maintenance and, on the whole, are significantly cheaper than diesel trains’, said Herrmann on January 23.

The federal transport strategy includes medium term plans for electrification of inter-regional routes in Bayern, but the Land would also like to see local lines electrified. It has identified seven priority routes, selected through a cost-benefit analysis which looked at traffic levels and the ability to reduce the use of diesel on already electrified routes and in urban areas. These are:

The Land also intends to finance a pilot projects to assess the viability of ‘innovative’ traction technologies which could reduce emissions on routes which are not yet designated for electrification. The proposals include:

The Land Transport Ministry said around 3 200 km of the 6 700 km of public railway in Bayern is currently electrified, and work is underway on the München – Lindau route for completion by 2021.