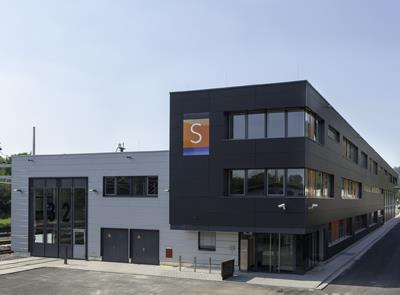 GERMANY: Stadtbahn Saar officially opened its €26m depot at Lebach on September 3, replacing a site in Saarbrücken which was 'temporarily' leased from Deutsche Bahn when Saarbahn light rail services were launched in 1997.

The depot brings light rail vehicle maintenance, stabling and cleaning together on one site, alongside office space, meeting rooms and facilities for 130 staff. As well as providing better working conditions than the previous arrangements, this is expected to offer lower running costs. Operations control is scheduled to move in during November.

The three-track covered workshop provides safe access to LRVs at roof and underfloor levels. Outside there are seven sidings, a test track and a washing plant with biological waste water treatment.