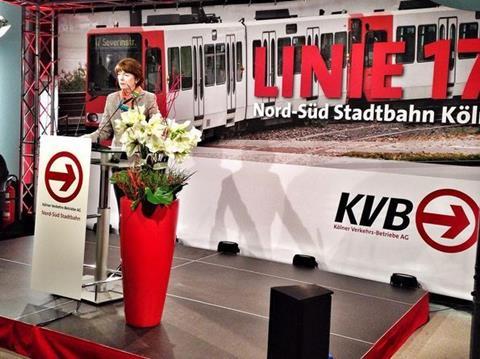 GERMANY: The third phase of the Nord-Süd Stadtbahn project in Köln was inaugurated on December 12 at a ceremony attended by around 450 invited guests. Regular services began the following day.

The 2·4 km section forms a branch off Route 16 at Schönhauser Straße, running north to Bonner Wall, Chlodwigplatz, Kartäuser Hof and Severinstraße. It is almost entirely in 30 m deep twin-bore tunnels.

Interchange is provided with routes 15 and 16 at Chlodwigplatz, and with routes 3 and 4 at Severinstraße. Ridership on Route 17 is forecast at 11 000 passengers per weekday.

Construction of the Nord-Süd Stadtbahn project to connect the high-floor north-south light rail routes through a tunnel under the old town started in 2004 but has been delayed by a ground collapse in March 2009. The first two phases opened in 2012 and 2013; the final stage between Severinstraße and Heumarkt is still to open. The total cost of the project is €1·15bn.