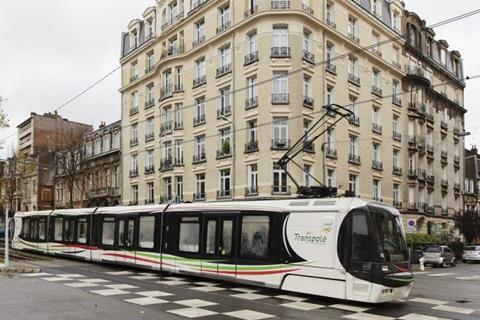 FRANCE: The Lille municipal government has approved a provisional budget of €150m for replacement of the city’s tram fleet, as part of a programme to expand the capacity of the network.

Rolling stock renewal is a core element in the €2bn operating contract awarded to Keolis in December 2017, which came into force from April 2018. The existing fleet of 24 low-floor cars supplied by Breda in 1994 are expected to reach life-expiry in 2024.

Ridership on the Y-shaped metre-gauge network has been rising steadily, averaging more than 51 000 passengers/day in 2019. This was leading to overcrowding at peak times, particularly on the core section from Lille Flandres to Romarin.

With the completion of urban development schemes and demographic changes, traffic levels are projected to reach 60 000 passengers/day by 2034, which could lead to overcrowding on the Tourcoing line in particular.

Meeting on October 16, Conseil de la Métropole européenne de Lille agreed to call tenders for 24 replacement low-floor cars with an option for a further six to accommodate projected growth. The new vehicles would be up to 32·4 m long, offering a potential 23% in capacity compared to the current 29·9 m trams. The external door spacing would be limited to a maximum of 24·5 m to fit the existing platforms and optimise passenger distribution at the stops.

As part of a transport master plan adopted by the council last year, studies are underway for the construction of five new tram routes by 2035, adding up to 50 km to the current 22 km network.

New routes would radiate north from Lille to Wambrechies, south to Seclin and west to Loos and Hallennes-lez-Haubourdin. The Roubaix branch would be extended to Watrellos, and there would be a short extension to the Tourcoing branch. The fifth route would provide an orbital connection between Tourcoing, Roubaix and Hem.