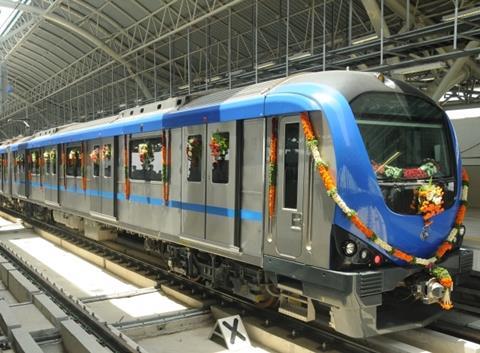 Announcing the contract on October 5, Alstom said it would supply 20 four-car Metropolis trainsets from its Sri City factory in Andhra Pradesh. The trains will be air-conditioned and equipped with a passenger information system. Alstom’s factories in Bangalore and Saint-Ouen in France will jointly supply Urbalis communications-based train control that will provide a design headway of 100 sec.

The government approved the first phase of the Lucknow metro earlier this year with a planned investment of Rs69·3bn. The project is being developed as a joint venture between the central government and the state of Uttar Pradesh.

Phase IA would connect Chaudhary Charan Singh International Airport and Munshipulia. Three stations on a 3·4 km section would be underground, with the remaining 19·4 km and 19 stations on an elevated alignment.

Passenger services on the initial 8·4 km section between Transport Nagar and Charbagh main line station are planned to start by December 2016. The line is expected to carry about 430 000 passengers per day in its first year of operation, increasing to more than 1 million by 2030.