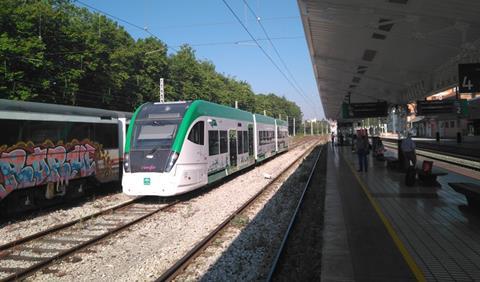 SPAIN: Overnight on September 2, a CAF LRV made the first runs over ADIF tracks as part of preparations for the opening of the Bahía de Cádiz tram-train route.

Initially expected to open in 2017, the tram-train project has involved the construction of 14 km of 1 668 mm gauge tramway in the towns of Chiclana de la Frontera and San Fernando, plus adaptation of 10 km of ADIF tracks on the main line into to Cádiz.

During the tests, the CAF LRV left the tram line at the Río Arillo stop in San Fernando, from where ADIF was responsible for monitoring and control of the vehicle under a complete possession of that section of the main line from Sevilla. While the three-section, 38 m long tram-trains were tested on 1 668 mm gauge tracks in northern Spain prior to acceptance by RENFE, the Río Arillo – Cádiz route will be the first main line in Spain to be used by a commercial tram-train service.

Commissioning trials are currently underway along the tramway section between Chiclana and Rio Arillo; drivers, ticket inspectors and other operating staff are being provided by RENFE. It is expected that the service will be launched next year, but no formal start date has been confirmed.