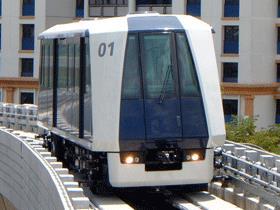 The Sengkang LRT and Punggol LRT lines together form a 22 km network, and provide interchange with the North East Line of the Singapore metro at the stations after which each is named. The two firms supplied their rubber-tyred Crystal Mover technology to LTA under a contract awarded in 1998, marking its first deployment outside Japan. The Sengkang line opened in 2003 and the Punggol line two years later. Substantial residential development in the north of the island in the intervening years means that daily ridership is now beginning to outstrip the capacity of the peoplemovers.

The MHI/MC consortium will supply 16 two-car trainsets to augment the existing fleet of 41 single cars; a further 16 of the existing cars will be modified for use in two-car formation. The consortium will also enhance the train control and power supply systems on both lines to allow two-car operation.

MHI/MC will be responsible for design, supply, testing and commissioning of vehicles, signalling and electrical equipment; the work is due for completion by the end of 2016.