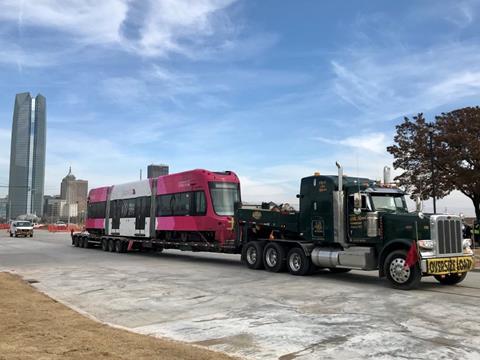 USA: The first of seven trams for Oklahoma City arrived on February 13 from Brookville Equipment Co’s factory in Pennsylvania. Haulage by road was provided by Silk Road Transport.

Brookville is supplying seven low-floor trams for the project, with the remaining six to be delivered at a rate of one every three weeks. Dynamic testing on the route is due to begin in mid-2018, ahead of opening at the end of the year.

The trams will run in mixed traffic, and are equipped with batteries for off-wire operation, which will be required on parts of the route. Each vehicle has capacity for 104 passengers.

A joint venture of Herzog and Stacy & Witbeck is building the tramway, with ADG, Jacobs Engineering, Aecom and SOJ providing consultancy services. A groundbreaking ceremony took place in February 2017, and construction of a maintenance depot at SW 7th Street and Hudson Avenue was completed last year.

The main route will consist of a figure-of-eight linking Bricktown with Midtown. D Line services are envisaged to run in one direction around this 7·5 route-km loop, supplemented by a 3·2 km B Line that overlaps with part of the Mainline Route at the southern end. There would be 22 stops in total, including nine shared between the two routes.

Services are expected to run at 12 to 15 min headways. Regional transport authority Embark has contracted Herzog Transit Services to operate the network.

The project budget is $131m, funded through the proceeds of a 1% sales tax under the MAPS 3 capital improvement programme.