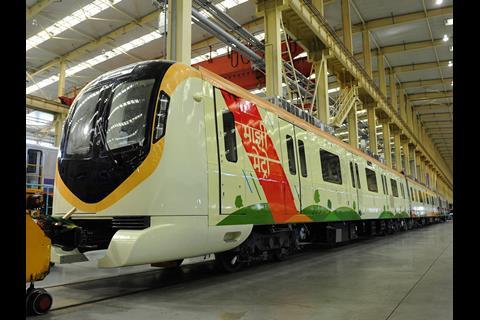 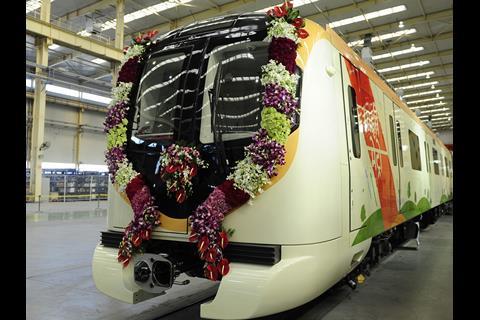 INDIA: CRRC Dalian has rolled out the first of 23 three-car trainsets it is building for the Nagpur Metro. Formed of stainless steel bodied cars with a 16 tonne axleload, the trains have a design speed of 80 km/h and can carry a crush load of 974 passengers.

The trainsets are being delivered under a Rs8·51bn contract awarded by project promoter Maharashtra Metro Rail Corp in October 2016 and signed in March 2017. This covers the supply of the fleet, commissioning, staff training and 10 years of maintenance.

MAHA-Metro is a 50:50 joint venture of the national and Maharashtra state governments. Construction of the two-line first phase of the Nagpur metro was officially launched when Prime Minister Narendra Modi laid a foundation stone on August 21 2014.

The 19·7 km north–south line will connect Automotive Square with Mihan City on a mostly elevated alignment with an underground section at the southern end and 15 stations.

At Jhansi Rani Square there will be an interchange with the 18·6 km east–west route connecting Prajapati Nagar with Bansi Nagar with 19 stations.

All but two of the stations will be elevated. The network will be electrified at 25 kV AC, and Siemens is supplying CBTC signalling.

Initial test running on a 3·5 km at-grade section of Line 1 began in October 2017, using two Hyundai Rotem trainsets which Maharashtra Metro Rail Corp had leased from Hyderabad ahead of the delivery of its own fleet.