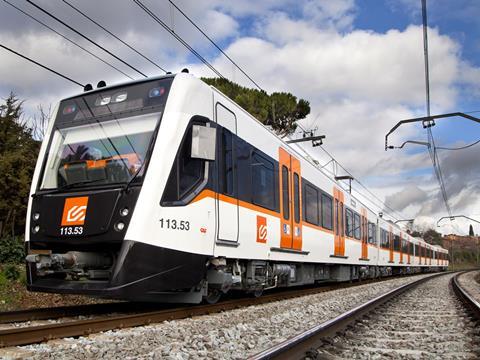 SPAIN: Catalunya regional operator FGC has awarded Stadler Rail a €99∙5m contract to supply 15 four-car Class 115 EMUs. The four-car trainsets are to be deployed from 2019 on FGC’s 1 435 mm gauge Vallès network serving Sabadell and Terrassa north of Barcelona. Following the completion of an extension to Sabadell Parc del Nord with three new stations, FGC is forecasting record traffic of 62 million passenger-journeys on the Vallès network in 2017, up 3∙9% on the year before. The new fleet will enable peak service frequencies on both routes to be doubled from every 10 min to 5 min. With passenger-journeys on the Vallès network expected to rise to 70 million by 2020, FGC is also undertaking resignalling work to increase capacity by shortening block sections. Production of the new Stadler Rail fleet is to be undertaken mainly in Valencia, with some bodyshell components coming from Hungary to shorten production times. Traction equipment is being supplied by Bombardier from its plant at Trápaga near Bilbao. Other bidders for the rolling stock contract were Talgo and a joint venture of Alstom and CAF.