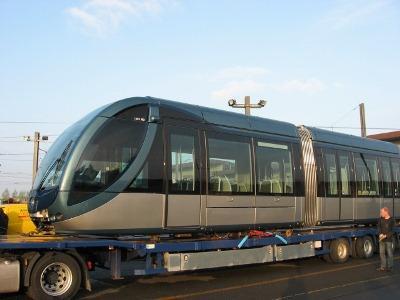 FRANCE: Alstom Transport delivered the first of 26 Citadis trams to Bordeaux on March 29 under a contract worth €80m. The 43 m 100% low-floor vehicles are for the lines being built under the 33 km Phase III expansion of the network, and they will be delivered over the following 12 months.

The Phase III programme covers the extension of the city’s three existing tram routes, plus more installation of the APS catenary-free power supply system. Alstom has an option under this contract to supply between five and 30 additional Citadis cars to support the planned Line D and higher-frequency services in the city centre. It was also chosen to fit APS power supply on three sections of the Phase III extensions.

Under Phase III, Line A will gain 3·6 km from Mérignac Centre to Magudas, due to open in late 2014. Line B will be extended at both ends: in the north by 750 m from Claveau to Bordeaux Nord (due to open in 2014), and in the south by 3·5 km from Bougnard to Alouette (to open in 2015). Line C will also be extended at both ends. Its northern terminus will be Parc des Expositions, 3·4·km beyond the existing stop at Aubiers (this section is due to open in December 2014), and in the south it will cover an additional 5·1 km from Terres Neuves to Terres Sud in Bègles (opening in 2015).

Two new lines are also planned. The 9·7 km Line D will run from Quinconces to Cantinolle; it is scheduled to open 2016. Finally, a 7·2 km tram-train route is planned to serve Blanquefort on RFF’s Bordeaux – Pointe de Grave line.