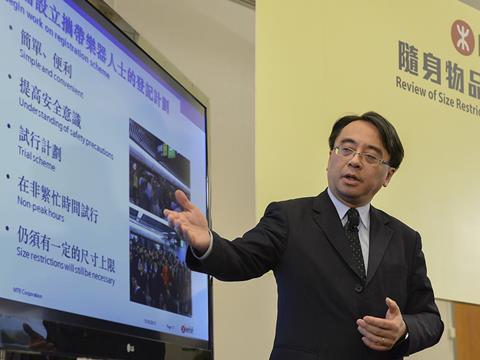 CHINA: Plans for a registration scheme which would allow large musical instruments to be carried on the Hong Kong metro network have been announced by MTR Corp.

Current rules say that items of luggage must not exceed 1 300 mm along any one side, a limit which was brought in partly to target people trading goods with the Mainland. However, consultation on a possible change has been undertaken following high-profile cases of passengers being prevented from travelling with a cello or guzheng slightly exceeding this limit, along with concern over inconsistent enforcement of the rules. A musical protest at Tai Wai station on October 3 attracted accordion and trombone players as well as a bagpiper.

‘We want to thank the music community and members of the public for working with us on this issue,’ said MTR Corp Operations Director Dr Jacob Kam on October 13. ‘We believe a viable way forward is to work on a registration scheme for musical instruments within a certain dimension outside our current size restrictions to allow them to be brought in to travel on the MTR during non-peak periods while, at the same time, keeping our existing rules.’

However, Kam warned that ‘we will probably not be able to accommodate all musical instruments. Indeed, the music community has advised us that normally, road transport is arranged for musical instruments that are larger than the size of a cello.’