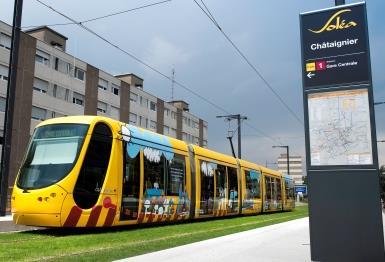 FRANCE: Following the opening of a three-station extension on July 4, Mulhouse’s tram line now serves the suburb of Bourtzwiller, as part of an ongoing urban regeneration project.

The opening day was marked with local celebrations and free travel. Officials made the inaugural trip using a tram decorated with a design developed by local children and named ‘Bourtzwiller’ to mark the occasion.

The 1·5 km extension connects the former terminal at Rattachement to Châtaignier, with intermediate stations at Tuilerie and St Nazaire. Construction started in April 2007 and took two years to complete. Running trials followed in June.

The new section of tramway, which cost around €25·5m, has been financed by Sitram, the state and the Haut-Rhin General Council. The existing 27 trams will continue to operate the line.

At the end of 2010, the first phase of the tram-train project between Thann-St-Jacques and Mulhouse will enter service. The tram-train will be able to run on both the conventional rail line and on the tram track in the city centre, where it will serve four stations at Zu Rhein, Dornach, Musées and Lutterbach.

Civil work is already underway and electrification of the 24 km line will start this summer. The first train is due to arrive in October 2009 for initial testing, and running trials will start a year later once the infrastructure is complete. Commercial operation is expected to start in December 2010.