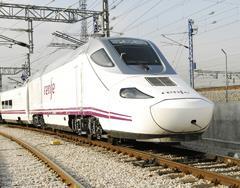 ADIF’s 2006-10 strategic plan sets a target of doubling the length of the high performance network. What is the current situation with this programme?

As of November 2008, the length of high peformance routes in service was nearly 1 600 km. In addition, ADIF has around 1 200 km of high speed lines at various phases of planning and construction. Amongst these is the Madrid – Valencia route, which is expected to enter service in 2010.

What is ADIF’s role in the high speed construction projects being taken forward by Spain’s regional governments, such as Andalucía and the Basque Country?

The Spanish government directs ADIF to build and maintain high speed lines in a number of different ways. In the case of lines being taken forward by regional governments, ADIF’s role varies according to the particular circumstances of the project.

What is the current situation of the ERTMS installation programme in Spain?

In addition, trials are currently underway of ERTMS Level 2 signalling on the Madrid – Lleida section of the high speed line to Barcelona, which will enable the maximum speed to be raised to 350 km/h where the infrastructure allows it.

What are the investment priorities for the conventional network in 2006-10?

Several national programmes are included in the contract-programme signed by ADIF and the Spanish government. These include investment to improve suburban passenger networks and the Ministry of Development’s level crossing elimination programme. In addition, the freight network is to be improved.

Under a resignalling plan that we are currently developing, it is hoped that by 2010 more than 60% of the network will be controlled by CTC and that over 80% will be equipped with automatic block, with telephone block to be abolished. ADIF will also be investing to modernise other components of the railway infrastructure, such as track, overhead electrification equipment and traction substations.

ADIF is expected to make a profit of €45m in 2010. How are you working to meet this objective?

ADIF’s strategic objectives include financial and economic sustainability, and one of our key tasks is to manage public resources with maximum efficiency and on strict business lines.

The main objective is to achieve financial break-even, fully meeting operating costs. To achieve this, we are expecting our income from track access charges to rise as new sections of the high speed network enter service. We are also working to improve operating results as well as the operation of the conventional network. In addition, by seeking to arrive at the optimum number of staff, our human resources plan will enable us to reduce operating costs.

Will maintenance of the conventional network be put out to tender?

Not at all. Maintenance of the national network is the responsibility of ADIF at the express command of the state, or in this case the Ministry of Development, as mandated by the Railway Sector Law.

In setting access charges, how has the need to cover ADIF’s costs been reconciled with the aim of stimulating liberalisation of the rail sector?

Railway reform in Spain has been guided by two key objectives, the separation of infrastructure management from train operations and the gradual opening-up of the rail transport market to competition.

ADIF’s operating income in 2007 was more than €2·2bn. Within this, track access fees accounted for €128·7m, while charges for using stations and other infrastructure amounted to €56·4m.

Therefore, breaking even in 2010 will be dependent on improving operational efficiency, increasing operating income (of which track access charges are only a minor part) and reducing operating costs.

In addition, ADIF is assisting the process of railway liberalisation by exercising its specific functions with complete impartiality. This is always the case when we are preparing reports for the Ministry of Development as it considers applications for operating licences and safety certificates, or when fees are charged for access to the network or the provision of other, complementary services.

How is ADIF ensuring that private operators gain fair access to the network, and what are the criteria for allocating paths?

Companies seeking to enter the rail transport market must follow the provisions of the Railway Sector Law and accompanying secondary legislation, specifically articles 58 to 97 of the Railway Sector Regulations. The most important requirements include holding an operating licence or other qualification, obtaining a safety certificate and being allocated the necessary network capacity.

Capacity allocation is the process by which ADIF grants timetable slots to operators so that a train can operate between two points within a set period of time. Allocating capacity involves granting the relevant access rights to the network administered by ADIF, as well as access to traffic control services including signalling.

Priorities for allocating train paths as established by the Railway Sector Regulations include any that the Ministry of Development may, where appropriate, set for the different types of service on each line. Certain types of service may enjoy priority on specialised routes, as well as services which are deemed to be meeting a public service requirement. ADIF must also take into consideration international services, the total number of paths available within the working timetable and the overall efficiency of the network.