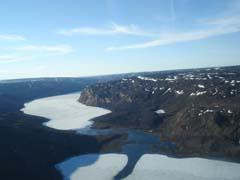 CANADA: On April 24 Montréal-based consultant Canarail announced that it had been awarded a contract from Baffinland Iron Mines Corp to undertake detailed design of a heavy-haul railway on Baffin Island, approximately 520 km north of the Arctic Circle.

Baffinland is currently developing a project to exploit the Mary River iron-ore deposit, which deposits were identified in the 1960s, but had not previously been considered viable to exploit because of the harsh environment. A scoping study by Aker Kvaerner completed in 2006 estimated the mine life at 34 years, with an average output of 10 million tonnes a year.

At that time Canarail was appointed to look at two options for the railway and port through which the ore could be shipped to markets around the world (RG 7.06 p374). The shortest option was a 105 km line running northwest to Milne Inlet, but the mining company has selected the 143 km southern route to a port on Steensby Inlet, which offers a longer navigation season.

Canarail has now been asked to apply its 'proven arctic design technologies to deal with permafrost, extreme temperatures and the remoteness of the site'. The design phase is expected to continue until mid-2010, when construction work will get underway. The mine is now planned to become operational in late 2013, with the first commercial shipments of ore scheduled for 2014.