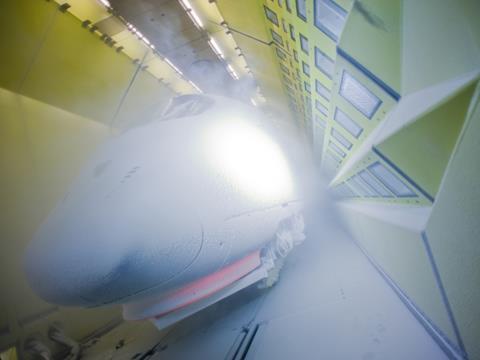 AUSTRIA: Two vehicles from the Russian variant of Siemens' Velaro high speed train family are being subjected to extreme conditions at the Rail Tec Arsenal climatic wind tunnel in Wien.

One Velaro RUS driving car and one intermediate vehicle have been sent from the Krefeld factory for testing.

This will verify the designs Siemens has produced to cope with the low temperatures which the Sapsan trains will experience once in service between Moscow and St Petersburg, including the use of special insulation and lubricants.

RTA has two climate chambers for rolling stock testing. The larger is 100 m long, and can simulate wind speeds of up to 300 km/h and temperatures between -50 and +60°C, with blizzards produced at the touch of a button.

A roller dynamometer allows brake and traction tests to be performed.