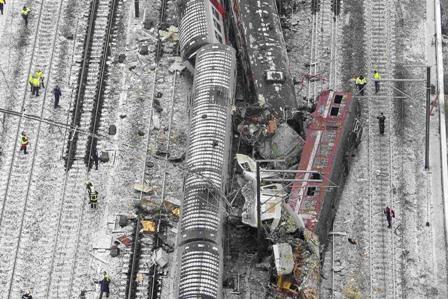 BELGIUM: Domestic and international train services into Brussels Midi remain severely disrupted as investigations continue into the cause of the fatal train crash at Buizingen during the morning rush hour on February 15. The worst railway accident in Belgium for more than 50 years killed 18 people, including one of the drivers, and injured 172 more.

The collision occurred at a series of ladder crossovers north of Halle, 13 km south of Brussels Midi. A six-car EMU from Leuven to Braine-le-Comte collided near-head-on with a 12-car inter-city train from Quiévrain to Liège being propelled by an electric locomotive. The inter-city train was running about 10 min late, and was being routed through the crossovers when it collided with the oncoming local train. The M4 series driving trailer of the push-pull train was totally destroyed by the impact.

The course of the accident suggests that the EMU may have passed a signal that should have been protecting the crossover movement, and the investigators will need to ascertain whether this was working correctly. Visibility may also have been an issue, as it was snowing at the time of the accident, and there is a flyover carrying the orbital Line 26 across the main line between Buizingen station and the junction at Halle Noord.

SNCB Chief Executive Marc De Scheemaecker told local media that one of the trains involved in the accident was not fitted with automatic train protection, although the tracks had been equipped as part of a national programme to install ATP across the network.

The introduction of ATP was agreed following a fatal collision at Pécrot in May 2001, which killed eight people. ETCS was favoured, but the technology was not considered sufficiently developed at that time.

It was not until 2006 that infrastructure manager Infrabel launched a €306m programme to install an interim system known as TBL1+, which uses ETCS-compatible components including Eurobalises. Infrabel expected to have equipped the whole network with TBL1+ by the end of 2012, with half of all routes handling 80% of the traffic to be fitted by the end of 2009.

SNCB ordered 866 sets of on-board equipment in 2007, and a further 956 sets the following year. However, many of its older trains are due to be phased out in the next few years, as SNCB has placed a framework contract for up to 300 new three-car EMUs as part of the Brussels RER programme.