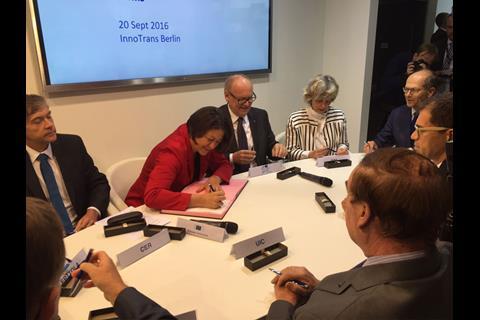 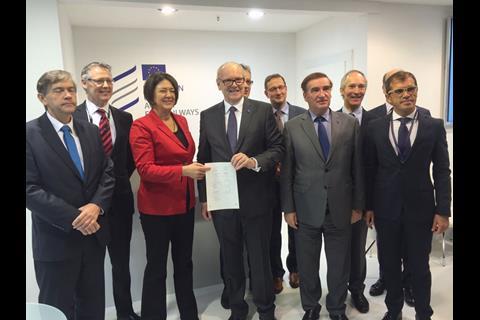 EUROPE: ERTMS deployment across Europe is to be formalised under the terms of a fourth memorandum of understanding between the European Union Agency for Railways and rail sector associations, which was signed at InnoTrans 2016 in Berlin on September 20.

European Union Transport Commissioner Violeta Bulc said ERTMS was 'the backbone of the digital railway', adding that digitalisation was essential to improve performance, competitiveness and customer service. The accord was 'all about deployment - now we have the technology, it is time to use it, time to get the benefits of it'.

Signatories included CER, EIM, EPPTOLA and ERFA representing the operators and infrastructure managers, UIC, UNIFE and UNISiG for the suppliers, the ERTMS Users Group and the GSM-R Industry Group.

According to ERA, the MoU 'puts in place the framework to give legal and technical certainty that a train equipped with the latest ERTMS release will be able to run on any compatible line with an acceptable level of performance'. Infrastructure managers have voluntarily agreed to facilitate free movement of ETCS-equipped trains that comply with ERA requirements ahead of the legal deadline of 2019.

The accord takes into account the 'longer-term perspective' initiative which looks at future 'game-changers' for railway digitisation and also the extended mandate for ERA under the technical pillar of the Fourth Railway Package.