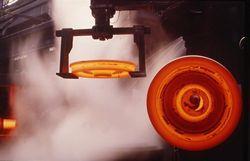 Prime Minister of Kazakhstan Karim Massimov has opened discussions with Transmash for the establishment of a electric locomotive plant near Astana. Costing around US$150m, it would have a capacity of up to 200 locos and 100 coaches a year. The Ministry of Transport & Communications has also signed a MOU with Bombardier for co-operation in rolling stock refurbishment.

On September 11 the Mayor of Winterthur attended a ground-breaking ceremony on the site of a SFr28m bogie plant which will serve the whole Stadler group. Production will commence in late 2009, with an initial annual capacity of 600 bogies and the possibility of expanding to 1 200. Servicing will remain at the former Sulzer site in the city.

Invensys Rail Group has purchased Quantum Engineering for US$38m, saying Quantum ‘has built a solid reputation for the development of main line onboard signalling, locomotive performance controls and train integrity devices in the Americas’, and would lift the group’s profile in the US after-?market business.

Skoda Transportation has acquired Czech rolling stock refurbishment firm MOVO Plzen. Founded in 1992, MOVO Plzen made a profit of KC23m on turn-over of KC370m in 2007.

On-train wireless broadband company Nomad Digital has raised a further £6m from investors. Following technology demonstrations in Wuhan, a joint venture in China is expected to be announced shortly.

In September Henan province and China South Locomotive & Rolling Stock Corp signed a strategic agreement to co-operate in the development of light rail manufacturing. CSR will provide technical support, and provincial policy will facilitate the expansion of CSR Luoyang.

Control of Indian wagon manufacturer Cimmco Birla has been passed from the SK Birla group to a newly-formed equal joint venture with Titagarh Wagons, which is able to invest in development.