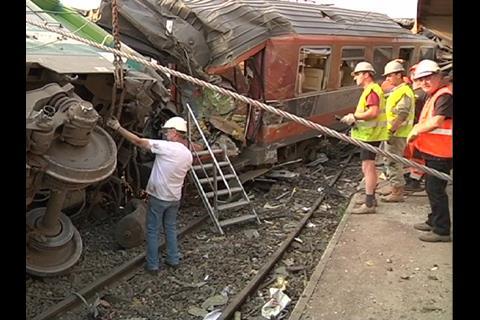 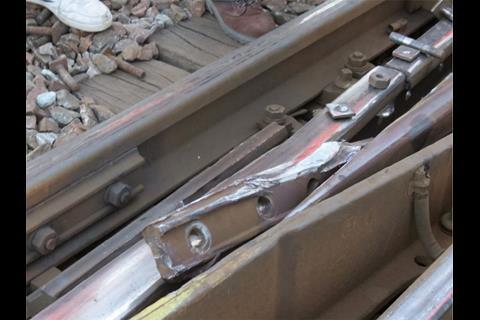 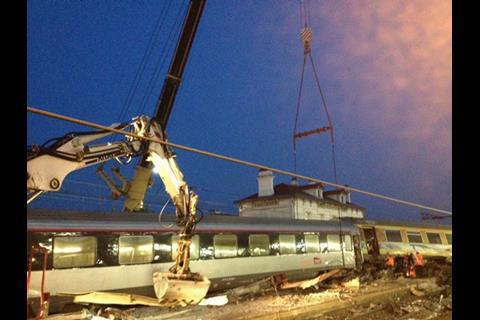 FRANCE: National railway operator SNCF and infrastructure manager RFF confirmed on July 14 that a loose fishplate was believed to have triggered the derailment of a Paris - Limoges Intercité express at Brétigny-sur-Orge on July 12, which killed six people and injured a further 62.

The seven-coach loco-hauled train which left Paris Austerlitz at 16.53 was carrying 385 passengers. The station at Brétigny, which is served by RER Line C, was busy at the time of the derailment, which occurred at 17.14 on the Friday evening before the national Bastille Day celebrations.

According to SNCF, investigators found that a fishplate connecting the running rail and nose of a diamond crossing 200 m before the station had become detached from the rail and wedged in the flangeway at the crossing nose. This was struck by the train, which was travelling at between 120 km/h and 140 km/h. The train parted between the fourth and fifth coaches, with the rear vehicles being flung about the station before coming to rest across three tracks and a platform.

Examination of the train had found no 'mechanical anomalies' with the axles, other than evidence of an impact on the brake disc on the last axle of the third coach, 'consistent with the hypothesis' of it having hit the errant fishplate. No defects had been found on the locomotive or either of the two preceding trains which had passed safely through the junction. There was also no evidence of human error on the part of either the train crew or signalling staff.

While investigations are continuing to determine how the fishplate at Brétigny came to be detached, RFF and SNCF Infra immediately launched a programme to examine around 5 000 similar sets of turnouts and crossings across the network. These will be subject to systematic monitoring over the next two weeks, with particular attention to fastenings in the area around the crossing nose.

Responding to comments by French President François Hollande about the condition of the conventional rail network, RFF and SNCF pointed out that annual expenditure on infrastructure maintenance had increased from €3bn in 2007 to €4·8bn in 2012 following an audit by the École Polytechnique de Lausanne. A total of €460m had been allocated for work on the Paris - Orléans - Limoges - Toulouse main line in 2004-16, including €70m in 2013 for track, turnout and overhead line renewals.

Another 10-year programme of renewals on RER Line C between Paris-Austerlitz and Étampes averaging €100m a year is scheduled for 2015-24, including the replacement of 155 km of track and 123 turnouts, as well as OLE and signalling renewals.