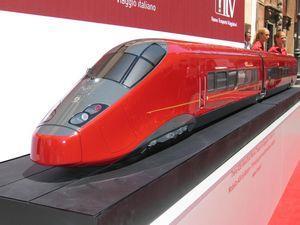 NTV Chairman Luca di Montezemolo said that his company's plans would make good use of the €40bn invested by the Italian government in a national high speed network.

The new company would give passengers choice when they travelled, said Montezemolo, adding that he expected to see 'other players invest in this field in the next few months'.

NTV Chief Executive Officer Giuseppe Sciarrone gave details of services planned for 2011, with a launch envisaged in spring or early summer of that year using the first four of 25 AGV trainsets ordered from Alstom. The first train would be delivered in September 2010, Sciarrone told Railway Gazette International, and this would be used to obtain the necessary European certification.

With the full fleet available, NTV would run 54 services a day, competing directly with Trenitalia's Eurostar Italia network. A total of 16 daily return services would link Milano and Roma, of which three each way would run non-stop in a 3 h timing. Four return trips a day would be made between Roma and Venezia, calling at Firenze and Bologna, and three return workings would join Roma with Bari in 3 h 55 min using the Roma - Napoli high speed line as far as Caserta. There would be 16 trains a day each way a between Roma and Napoli.

Sciarrone revealed exclusively to Railway Gazette International that in the framework agreement signed with Rete Ferroviaria Italiana on January 17 2008 'all the paths we asked for' had been agreed.

Breakeven is envisaged in the third year of operations, and by 2015 NTV is targeting a 20% share of the Italian domestic high speed market with 10 million passengers a year