INDIA: A better understanding of processes, materials and standards used by manufacturers of solid core porcelain insulators has the potential to cut mechanical failures from five to two a year per 10 000 installed. The higher service reliability should help Indian Railways lift annual freight tonnage from 800 to 1 100 million by 2011-12. 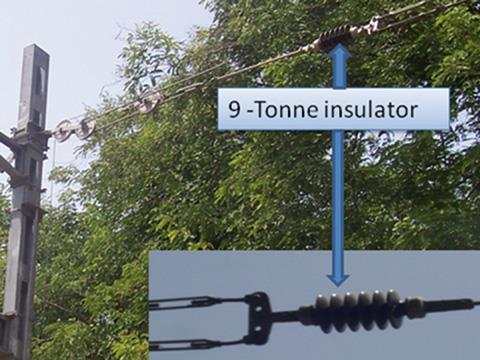 Almost 28% of Indian Railways’ 63 332 km network is electrified at 25 kV 50 Hz, and these 18 000 km are the lines carrying the heaviest traffic. Nearly 2 million solid core porcelain insulators support the catenary, and when one of them breaks mechanically or for any other reason the impact on rail traffic is significant. Repairs can take 3 h or more, with financial losses typically around Rs100 000 an hour.

In recent years the annual failure rate due to mechanical fracture of the porcelain core has been five per 10 000 installed, approximately three a day across the network. However, a programme of research carried out since 2002 has the potential to reduce the annual mechanical failure rate predicted for insulators now being installed from five to two per 10 000.

This compares with one per 10 000 which is typical for electricity supply utilities, but these are mostly caused by flashovers1 whereas severe vibration is imposed on railway insulators by passing pantographs and mechanical fracture is the dominant failure mode2,3.

IR uses three basic types of porcelain insulator. The standard arrangement where the catenary is supported from a single mast requires a Stay insulator in tension and Bracket insulator in compression (Fig 1).

The third type is the ‘9 tonne’ insulator typically used at each end of a 1·5 km section of weight-tensioned catenary. As the name implies, this has to withstand the combined tension forces in the catenary and contact wires (Fig 2). This is the insulator that is most prone to failure, and the annual rate per 10 000 in service from all causes was 16·6 over the last six years (Table I).

Test results from samples collected from 9 tonne insulators already in use suggest that 40% to 45% had failed at tensile forces below 77 kN, which is 70% of the 110 kN ultimate tensile strength (9 tonnes is 88·2 kN). The nominal tension force in standard catenary sections of 1·5 km is 20 kN. All new 9 tonne insulators are now tested at 77 kN, eliminating the possibility of installation of insulators with tensile strength less than this figure.

One factor that emerged from our examination of failed insulators, plus some from suspect batches not actually used, was the importance of adequate core diameter. Nearly 300 samples were examined in all, and it was observed that 64% of those which had failed had core diameters smaller than 70 mm in the case of Stay and Bracket insulators, while some 9 tonne insulators had cores as small as 70 mm.

Up to that time, the choice of core diameter had been the prerogative of the manufacturer, but specifications now call for minimum diameters of 70 mm for Stay and Bracket and 82 mm for 9 tonne insulators.

Failures of all three types not attributable to external causes were analysed from 2000 to 2006 and the results are shown in Fig 3. It can be seen that 52% of failures occurred within the first 15 years of service. Only 8% failed in years 21 to 30, but 19% failed in half the time during years 31 to 35. It is also notable that there are large numbers of insulators which are still in service after more than 45 years.

A scheme was developed in 2001 to weed out suspect batches of failure-prone insulators. Whenever two or more failures occurred in a particular product or batch, maintenance staff were advised to remove five more in the same area and test them for ultimate tensile strength. Test results showed that in many cases the insulators failed at half the specified tensile force, and where the Quality Index (p44) proved to be less than 1·45 replacement of the whole batch was recommended.

However, the suspect population of insulators kept growing, and eventually reached 200 000 which is almost 10% of the total in service. Worse, it was discovered that the condemned batches only accounted for 25% of all failures, and there was no guarantee that the insulators used to replace the failure-prone batches would themselves provide long, trouble-free service.

It was at this point that RDSO embarked upon in-depth analysis of the material from which the failing insulators were made, using X-Ray Diffractometry (XRD), Energy Dispersive X-Ray Analysis (EXDA) and the Scanning Electron Microscope (SEM) to determine the phase component, chemical composition and microstructure.

From February 2002 to September 2004 tests were carried out on prototypes and on selected batches supplied by different manufacturers for acceptance tests. We looked at the composition of five samples across the range.

Sample 1 had given no trouble in more than 15 years of service.

Sample 2 failed after eight years and this was attributed to high impurities and lack of homogeneity in the glassy matrix of the porcelain.

Sample 3 failed after four years due to high impurities and inhomogenity, even though its alumina content was over 40% and alpha quartz less than 5 0%. Inhomogenity within the porcelain glassy matrix was very erratic (Fig 4) with wide variations from one region to another. Table II shows the inconsistent content of region 1 (left side) and region 2 (bottom centre). The conclusion is that a very important role is played by homogeneous phase distribution in the porcelain matrix.

Samples 4 and 5 suffered early failures due to low alumina and alpha alumina content and high values of alpha quartz and impurities.

The two main phases in the microstructure of the porcelain matrix are corundum and mullite4. The first is most desirable as it resists the propagation of cracks, which cause uneven stress distribution. Up to 4% mullite is beneficial in producing a longer life, but that life is shortened as the proportion goes above that as it propagates cracks due to its needle structure. The formation of both phases depends on sintering and heat treatment processes.

When comparative XRD, EDXA and SEM analyses were carried out during prototype and acceptance tests by manufacturers on more than 240 insulators, results indicate that prototype test results are generally superior to those carried out on insulators leaving the production line. Another conclusion was that there are wide variations in material composition among the different suppliers to Indian Railways.

There were also batches in which alumina content was as low as 20%, alpha quartz more than 10%, impurities more than 3%, and inhomogenities in the glassy matrix above 50%. As no limits were stipulated for these parameters in IR’s specification, such insulators had gone into service and are likely to cause premature failures in future.

To deal with this situation, a Quality Index has been adopted that relates the average value of tensile load tests to the specified tensile load. RDSO’s specification of 1999 adopted a QI value of 1·45 for five samples in line with IEC 605915. However, it is now evident that at this level 7·35% of insulators could have lower mechanical strength than specified.

The QI for five samples has now been raised to 2·50 which reduces the number of insulators with insufficient strength to 0·62%, and it appears possible to reach a QI of 3·00 reducing the failure rate to only 0·13%.

However, this requires stringent quality control both in the manufacturing process and selection of raw materials, embracing among other elements chemical composition, homogeneity, mixing, process control, core diameter and firing.

All the conclusions from the work carried out since 2002 have now been brought together in a new specification which suppliers of porcelain insulators must meet. Some parameters in the list (1 to 5 and 9) did not exist in earlier specifications, and others have been upgraded:

3. Impurities: under 2% by EDXA and SEM; lower values preferred.

4. Variation in composition of glassy matrix regions: under 20% by EDXA and SEM.

9. XRD, EDXA and SEM tests to be part of acceptance test.

Indian Railways is now installing insulators that meet this specification, and results from recent prototype and acceptance tests are encouraging. They should provide a much longer service life, thus improving significantly the reliability of train operations on electrified lines.

The financial benefit from reducing annual insulator failures from five to two per 10 000 km is expected to be Rs6m, based on a reduction in line block charges at Rs100 000 per hour. There will also be savings from purchasing and storing fewer insulators.

Meanwhile, samples of those insulators that do fail will continue to be analysed by XRD, EDXA and SEM to help predict life expectation in a more scientific manner. Hitherto these tests had to be performed by the Central Power Research Institute in Bangalore, but IR is acquiring the necessary equipment to bring this function in-house.

Although this work has been carried out for 25 kV solid-core insulator used on electrified railways, it can equally be applied wherever insulators of this type are used.