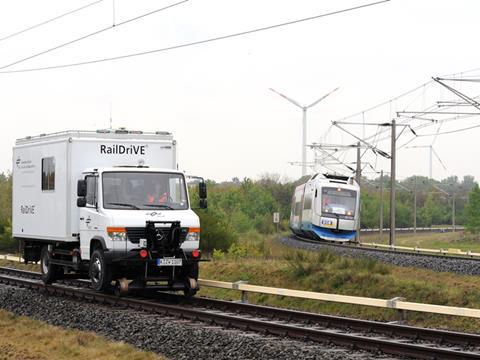 GERMANY: Trials are being undertaken at the Wegberg-Wildenrath test centre near Düsseldorf with a collision avoidance technique based on short-distance train-to-train transmission.

The trials are being led by aerospace research agency Deutches Zentrum für Luft- und Raumfahrt, which is providing researchers from its institutes for Transportation Systems, Communications & Navigation and Robotics & Mechatronics. DLR partnered with train operator Bayerischen Oberlandbahn for the trials — BOB offered use of an Integral DMU and crew. The other vehicle used was DLR’s own ‘RailDrivE’ road-rail unit.

‘RCAS is a system for preventing train collisions that operates independently of other safety technology deployed alongside the railway tracks’, explained Professor Dr Thomas Strang, Project Director at DLR.

The DLR researchers delivered lectures and showed models to participants during a day of demonstration running on May 11. Observers were able to travel on the Integral, which was equipped with RCAS to communicate with the road-rail vehicle.

The two trains simulated three scenarios: one where the two were running alongside each other, simultaneously approaching a section of single-track line. In the second, one train headed for a set of points beyond which one route was occupied and the other clear, but the setting of the points was unclear. In a third test run, a train was left stationary near a set of points but did not constitute a hazard, and the system successfully recognised this.

In all cases, RCAS assesses the situation automatically. If it detects a conflicting move, theRCAS onboard interface prompts the driver to apply the brakes.

‘RCAS is initially intended for routes and situations where, at present, no other protection systems are employed — for example, routes with very low volumes of traffic, industrial railways, construction sites or shunting areas’, according to Dr Michael Meyer zu Hörste, a DLR rail transport researcher. RCAS is in no way intended to replace ERTMS, he added. ‘It is an add-on system — RCAS can act as a safety overlay in places where conventional technology is not being employed.’

According to DLR, the existing prototype is based on ‘standard commercial hardware and software’, which in its existing form does not hold official approval for safety-critical fields of operation, and this will not be sought.

Since RCAS does not require the installation of any train control or signalling hardware nor changes to infrastructure, it can be deployed cost-effectively as a simple onboard unit in the cab.