UK: A second tranche of energy efficiency measures has been implemented by TransPennine Express and Siemens to reduce further the carbon footprint of the Desiro DMUs operating regional and inter-city services across northern England and Scotland. 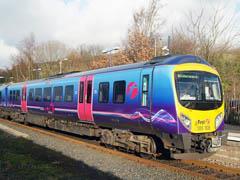 Siemens Mobility and TransPennine Express initiated the Eco-Mode programme to maximise the energy efficiency of the Class 185 fleet in July 2007. By the end of last year, a range of techniques had been adopted aimed primarily at helping drivers to conserve fuel through a more detailed understanding of the topography of the routes covered by TPE’s fleet. Eco-Mode Phase 1 yielded savings equivalent to 1·8 million litres of fuel per year (RG 1.08 p38), but the two companies have continued to develop a more sophisticated approach based around computer control of each train’s power usage.

At the heart of the programme is the selective use of the Cummins QSK19 powerpacks, rated at 750 hp, which are located under each of the three cars. The second phase introduces the 'eco-cruise’ concept, a driver-selectable facility that maintains the speed of the train automatically on two engines, allowing the third to be shut down to save on fuel and lifecycle costs. The driver is able to select the function as soon as the desired cruise speed is reached.

The engine shutdown has no impact on journey times however, as all three power units are used to accelerate to line speed. No hardware changes have been made to the DMUs — the cruise facility can be managed using the existing driver-machine interface.

Shutdown on the move

As part of the latest upgrade, Eco-Mode now allows the train to run automatically on two engines during part of a journey where full power is only required sporadically, for example when accelerating away from ?station calls.

The selection is made on the basis of an algorithm that analyses the geographical location of the train, its speed and the driver’s traction needs. On a less arduous route, such as between York and Scarborough, two-engine running is triggered very early in the journey, whereas on higher-speed routes all three cars are powered throughout. This is a particular feature of TPE services from Manchester Airport to Glasgow and Edinburgh via the steeply-graded northern section of the West Coast Main Line.

TPE expects Eco-Mode Phase 2 to extend the annual reduction in fuel consumption from 7% under Phase 1 to 11%, and the programme as a whole should reduce engine hours by 20%.

In addition to the fuel saving benefits that the software brings, there are additional advantages such as a reduction in engine idling. Most of TPE services now arrive at terminal stations with only two engines running, and one of these is automatically shut down one minute after arrival. These are then re-started just prior to departure.

The programme to modify the 51-strong Class 185 fleet to full Eco-Mode operation was due for completion at the end of August. Passengers are likely to notice the change only through a quieter ride and quieter stations.