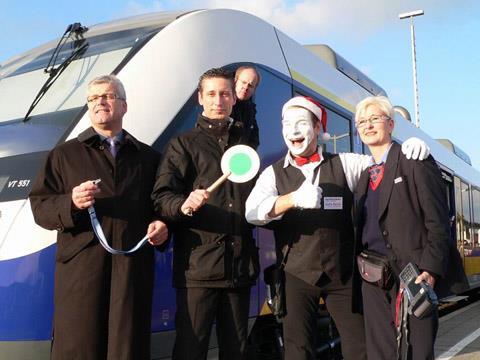 GERMANY: With the December timetable change NordWestBahn took over Niers-Rhein-Emscher-Netz services under a 16-year contract with the Rhein-Ruhr transport authority which is expected to generate total revenue of €500m. The contract will be expanded at the end of this year with the addition of services from Oberhausen to Duisburg-Ruhrort and Dorsten. NWB will also take over the Regio S-Bahn Bremen/Niedersachsen network this December.

'Germany has always been a pioneer in management and deregulation of its rail network', said Cyrille du Peloux, CEO of Veolia Transport which is a part owner of NWB. 'Veolia Transport has been active since the opening of this network and is very steadily winning new market share.'

The end of 2009 also saw the start of a three-year contract for Veolia to operate local trains in Leipzig, the short duration reflecting the reorganisation which will follow completion of the cross-city tunnel in 2012.

The 11-year Bayerische Regiobahn contract which began in 2008 has been expanded to include Augsburg - Ingolstadt - Eichstätt services. Veolia said there has been a rise in passengers on the lines formerly operated by DB, which it said was down to better communication, improved ticketing and child-friendly facilities.