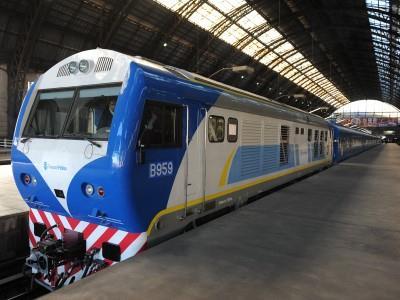 ARGENTINA: Diesel locomotives and commuter coaches supplied by CSR of China entered service on the Mitre network in Buenos Aires on June 6, providing peak-hour services between Retiro and Tigre. Three five-car formations with a diesel locomotive at each end have been deployed on the route, departing Tigre at 06.56, 07.17 and 07.38, and returning from the Retiro terminus at 17.33, 17.54 and 18.15.

‘It is 52 years since new rolling stock has run on the Mitre network’, said Minister of the Interior & Transport Florencio Randazzo. ‘The last time was in 1961 when the Toshiba cars arrived which are still in service’.

The CSR fleet has been deployed on the Mitre network while platforms on the San Martín route are raised to match the floor height of the new vehicles. Each air-conditioned coach has seats for 78 passengers, and safety features include ‘intelligent’ powered doors and anti-override protection.