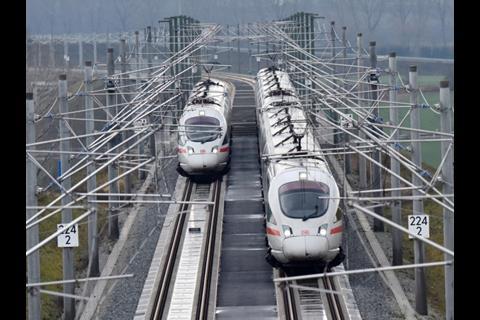 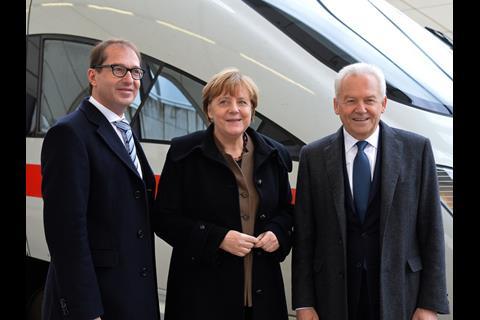 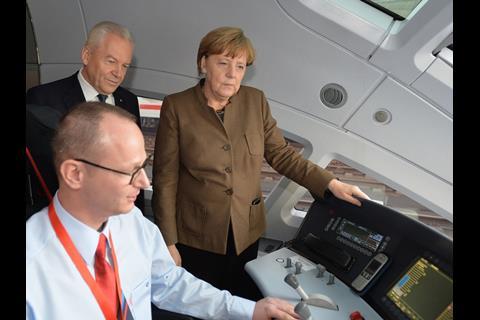 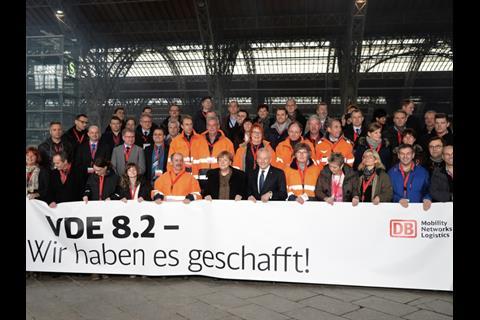 GERMANY: With the parallel operation of two special trains, Deutsche Bahn officially inaugurated 123 km of new high speed line between Erfurt, Halle and Leipzig on December 9. DB expects to launch commercial services over the route with the timetable change on December 13.

DB Chairman Rüdiger Grube and other board members were joined for the celebrations by Chancellor Angela Merkel and Federal Transport Minister Alexander Dobrindt, as well as the Presidents of Sachsen, Sachsen-Anhalt und Thüringen. Amidst unprecedented security and a large police presence, the VIPs travelled on the inaugural train from Halle to Erfurt, before the two ICEs returned in parallel to Leipzig where the opening ceremonies took place.

Forming part of the TEN-T corridor linking Berlin with München, Roma and Palermo, the 120 km Leipzig – Erfurt line has been designed for 300 km/h operation. However, it will initially be worked at a maximum of 230 km/h using refurbished ICE-T trainsets fitted with ETCS Level 2. Halle an der Saale, the largest city in Sachsen-Anhalt, lies a few kilometres north of the route, reached by connecting links in each direction.

Completion of the new line will allow DB to shorten journey times from the timetable change, but mainly in the east-west direction. Frankfurt – Leipzig timings will be cut by 50 min to just 3 h. Only with the opening of the Erfurt – Ebensfeld section in 2017 will DB be able to reduce journey times on the north – south axis, cutting the fastest Berlin – München timing from 6 h to 3 h 55 min.

Formal approval of the line was only received from the Federal Railway Agency on December 8, following discussions over the slab track structure used on 14 km of bridges, including the 8 614 m Saale-Elster Viaduct, which becomes the longest railway bridge in Germany. Because of changes to the track structure, DB has had to provide EBA with a ‘proof of equivalent safety’ in order to obtain a conditional operating licence.

Among the changes in the new timetable is the launch of four ICE Sprinter services a day each way between Frankfurt and Berlin via Erfurt and Halle, with a journey time of around 4 h. Six ICE return workings a day will link Erfurt and Berlin in 1 h 50 min, and there will be hourly Frankfurt – Dresden trains taking 4 h 20 min.

Elsewhere, more Sprinter services will be introduced, for example between Stuttgart and Frankfurt, and DB is dropping the supplementary fare and mandatory reservation requirement for Sprinter travel.

There will be six instead of four daily Praha – Berlin workings, while reorganisation of Hamburg – Berlin operations will shorten Hamburg – Dresden trips to about 4 h 10 min. Construction of the Erfurt – Ebensfeld line will require the closure of the Bamberg – Lichtenfels route from January 11 to September 4 2016.

During the currency of the new timetable DB plans to introduce its first double-deck IC services using push-pull formations being delivered from Bombardier. Branded as IC2, they will serve the Leipzig – Hannover – Bremen – Norddeich and Dresden – Leipzig – Hannover – Köln routes, as well as Norddeich to Köln via Münster. However, the December 2015 timetable sees withdrawal of Berlin – München overnight trains.