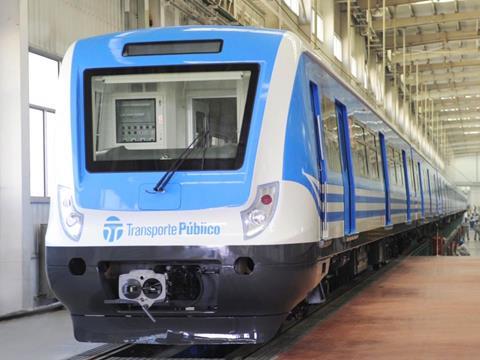 ARGENTINA: Presenting images of the first of 25 nine-car EMUs to be completed by Chinese supplier CSR for the Sarmiento commuter route in Buenos Aires, Minister of the Interior & Transport Florencio Randazzo confirmed that shipments would start on January 5. ‘In mid-February they are going to be in Argentina’, he said, adding that the new fleet would enter service in June.

Equipped with anti-override protection and an automatic train stop system, the air-conditioned CSR fleet would double capacity on the Sarmiento route between Once and Moreno, Randazzo pointed out. Replacing the current fleet of 12 EMUs, each CSR trainset would have capacity for 200 passengers.

With a total of 580 cars currently operating across the seven commuter routes in Buenos Aires, Randazzo said that over 1 000 new vehicles would be delivered next year, including more coaches for long-distance services. CSR is also supplying 90 EMU cars for the Mitre network and 300 for the Roca, while CNR is building 81 DMU cars for the Belgrano Sur.