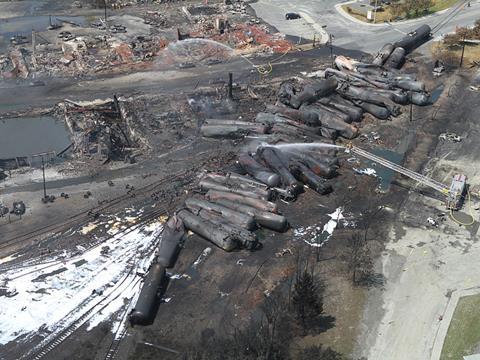 CANADA: On April 23 Minister of Transport Lisa Raitt announced the federal government’s response to the initial recommendations arising from Transportation Safety Board of Canada's ongoing investigation into the July 2013 Lac-Mégantic derailment.

With immediate effect, Transport Canada will:

Transport Canada is to formalise updated standards for DOT-111 cars this summer, and is working with stakeholders including the US regulatory agencies and industry to determine what additional requirements may be needed.

The Railway Association of Canada said it supported the new rules and would work with Transport Canada and other stakeholders to ensure compliance. The announcement was also supported by wagon manufacturer The Greenbrier Companies, with CEO William A Furman saying it would offer ‘greater regulatory certainly on tank car standards’.

Canadian Pacific welcomed the rules regarding DOT-111 cars, but expressed ‘disappointment’ with ‘incomplete actions’ addressing human factors. ‘While we will comply with all the orders, I must again reiterate that reducing train speeds does not address the causes of railway accidents, nor is it a solution to rail safety’, said CP Chief Executive E Hunter Harrison. ‘Human behaviours are a significant factor and should be the focus if the goal is to truly improve safety.’

CP said it would like regulatory changes to support the use of ‘inward facing cameras in locomotives to allow for compliance monitoring’ and a programme to reduce level crossing accidents.