Foxx to succeed LaHood as US Transportation Secretary 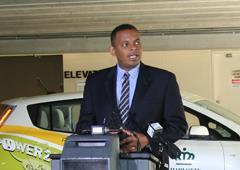 USA: Mayor of Charlotte Anthony Foxx has accepted President Obama’s nomination to succeed Ray LaHood as US Secretary of Transportation.

Foxx has been mayor of Charlotte, North Carolina, since 2009, during which time he has been a keen advocate of public transport, and light rail and streetcars in particular. Charlotte’s initial 15·5 km LYNX light rail line opened in 2007, and a 15 km extension worth $1·16bn was agreed in October 2012. Foxx has also supported a local campaign to develop a 16 km circular streetcar route in the city centre, which would build upon a 2·4 km starter section now under construction.

Whilst some observers have suggested that Obama’s decision to pick a city mayor as transportation secretary is somewhat unexpected, incumbent Ray LaHood complemented his successor’s ‘understanding that transportation is a backbone of how we live and a key driver of our economy.’

While Foxx’s appointment is still to be ratified formally by the Senate, LaHood insisted that Foxx was ‘the right man for the job’, before reflecting on his own tenure, saying that Transportation Secretary was ‘the best job I’ve ever had, and I do not leave it lightly’.