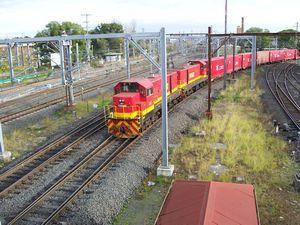 AUSTRALIA: Announcing its 2013-14 budget on May 14, the federal government set out a preliminary schedule for the major rail projects to be undertaken within the next Nation Building five-year investment programme, which will run from July 2014 to 2019.

The biggest rail projects are A$3bn for the Melbourne Metro suburban rail upgrade programme (RG 5.13 p16), which Infrastructure Australia has identified as a ‘priority’ project of national significance. A 9 km tunnel from South Kensington to South Yarra would support up to 19 extra trains/h, significantly increasing capacity.

In an effort to attract private finance, the federal and state governments have agreed that the project would be funded through a combination of up-front grants and availability payments, with the federal government to meet half of each. Details are to be finalised in the coming months.

Similarly, Brisbane’s 9·8 km Cross River tunnel between Yeerongpilly and Victoria Park with underground stations at Woolloongabba, Boggo Road, Albert Street and Roma Street is to be funded through a combination of grants and availability payments, with the federal government contributing 50% and guaranteeing private-sector debt for the PPP component.

Funding is also to be allocated to the Perth Light Rail project and/or airport rail link. Priorities and construction timetables are to be determined in consultation with the state government, and are subject to an assessment by Infrastructure Australia.

Port Botany rail upgrade: improve access and connectivity between the port and the future Moorebank Intermodal Terminal, along with planning for the Metropolitan Freight Network.
Federal contribution A$75m.