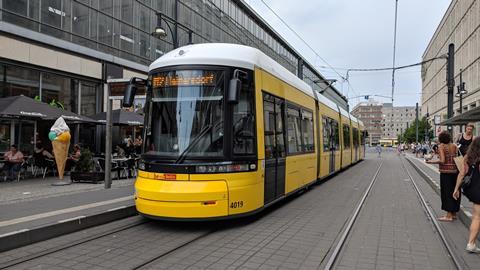 Following a presentation by the capital’s Senator for Environment, Transport & Climate Protection Regine Günther on June 9, the Senate commissioned BVG to finalise the preferred route for the 4·1 km extension and develop detailed draft plans. These will identify any properties which would be affected by land take, noise or vibration, and examine the technical feasibility of mitigation measures.

The extension of route M2 would serve the eastern part of Heinersdorf and the new Blankenburg Süd urban development area before terminating at the S-Bahn station. A multimodal study had recommended a tram extension as the best option to serve the expanding residential area, connecting it with the S-Bahn to the west and the city centre to the south. A financial assessment confirmed that the project would meet the requirements for Berlin to apply for federal funding towards the estimated €60m cost.

The preferred variant would follow the existing tram route along Aidastraße and then northeast to the intersection of Blankenburger Straße and Romain-Rolland-Straße. Instead of continuing to the current terminus at Pankow-Heinersdorf, the line would turn right and head north-east through Heinersdorf and Blankenburg Süd, continuing along Bahnhofstrasse to the S-Bahn interchange. However, the Senate said this route was not yet binding.

Public consultation is to begin shortly as part of the planning process. Subject to completion of the technical studies and the formal planning approval, the Senate believes that the extension could be completed by the end of 2022.