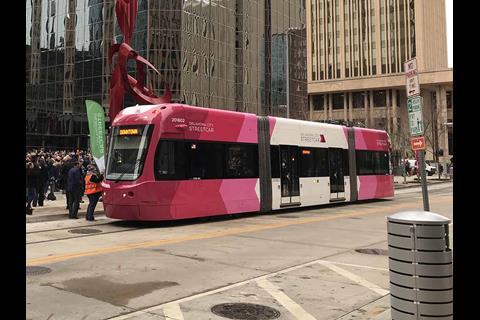 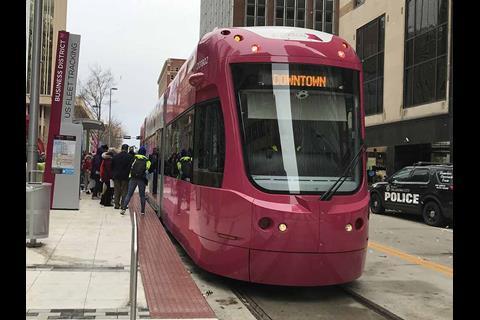 USA: The Oklahoma City Streetcar was inaugurated on December 14 at a ceremony in Leadership Square attended by officials including Mayor David Holt. Travel is free until January 5.

‘Our streetcar will be an important economic development tool for our entire city, accommodating visitors and residents alike’, said Holt. ‘It will encourage walkability downtown, answer the question of how residents and visitors will circulate downtown once they arrive, and will inspire private investment all along the route.’

The main 7·5 track-km route consists of a figure-of-eight linking Bricktown with Midtown, called the Downtown Loop. Services run in one direction every 12 to 14 min. A second 3·2 km Bricktown Loop overlaps with the southern end of the Downtown Loop, offering supplementary services every 15 min on Fridays and Saturdays only. Services on Sundays will only be operated to cater for special events along the route.

Brookville Equipment Co has supplied a fleet of seven low-floor vehicles. These run in mixed traffic, and are equipped with batteries so that they can run off-wire on short sections of the route. The vehicles are stabled at a maintenance depot at SW 7th Street and Hudson Avenue. Herzog Transit Services is responsible for operations under a contract awarded by city transport operator Embark.

Construction of the network began in February 2017, being undertaken by a joint venture of Herzog and Stacy & Witbeck. ADG, Jacobs Engineering, Aecom and SOJ provided consultancy services.

The $135m project was funded through the proceeds of a 1% sales tax under the MAPS 3 capital improvement programme.