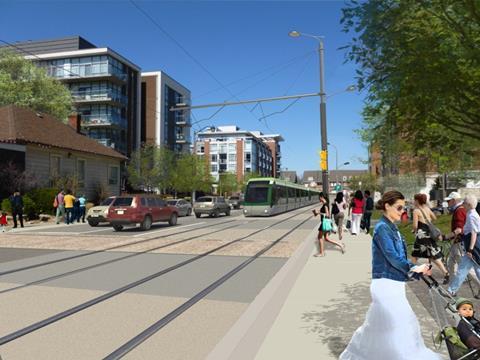 CANADA: Infrastructure Ontario and Metrolinx have selected the Mobilinx consortium as preferred bidder for the contract to design, build, finance, operate and maintain the Hurontario Light Rail Transit project to the west of Toronto. The contract is expected to the be awarded later this year.

Mobilinx is made up of John Laing, Astaldi, Hitachi, Transdev, Amico Concessions, Salini Impregilo. Bot will also be involved in the construction, with IBI Group, Morrison Hershfield, Arcadis and Daoust Lestage in the design group. National Bank and HSBC are financial advisors.

The 18 km light rail line would link Port Credit GO Station in Mississauga with the Gateway Terminal at Steeles Avenue in Brampton. There would be 19 stops, including interchanges with GO Transit’s Milton and Lakeshore West lines. A maintenance depot is to be built south of Highway 407 and west of Kennedy Road.